Since the influencer industry took off, social media influencers have been questioned about their authenticity. In most cases, this question refers to the type of content influencers post. In some cases, consumers may think that influencers only promote products for monetary gain, rather than being genuinely interested in them.

Another aspect of an influencer’s profile that is often overlooked is their follower base. It is safe to assume that influencers have worked hard and put in a lot of dedication to build their following. Sadly, this isn’t always the case – some influencers have grown their audience by purchasing fake followers.

Follower fraud refers to influencers who have made it appear that they have a large follower count by purchasing fake followers. This is done to deceive brands into wanting to work with them. In most cases, influencers rely on bots to like and comment on their posts. To make their account seem desirable to brands, influencers purchase bots to have it seem like they have users actively engaging in their content and interacting with their account. 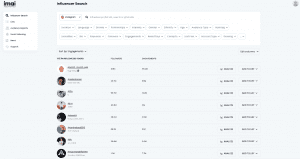 The results of the study reinforce why it is crucial to use an influencer marketing platform when looking for influencers to partner with your brand. IMAI’s API integrations provide you with the data necessary to make an informed decision on which influencer is the right fit for your brand. Our technology has algorithms to calculate an influencer’s followers credibility, audiences’ interests, engagement rates and more. Additionally, IMAI gives you a breakdown of an influencers follower base, displaying the percentage of real users and fake followers/bots. ‘‘Fake Followers’ are determined by scanning users profile’s for suspicious activity, such as having no profile picture and using automation services.